This article is a response to a question posted on the International Hempcrete Builders Forum concerning density and thermal performance. The original question can be found here.

It is difficult to compare the density between spray-applied hempcrete and hand-cast without considering consistency across the industry first. Hemp is a natural material and as such varies in particle size and quality. When hand-casting it is mixed in varying proportions, with differing amounts of different binders, and water is added in different amounts under different conditions by different mixers. The hempcrete is then placed into different types of shuttering and tamped down to varying degrees of compactness. It is, then, easy to see that density may vary considerably between samples. If you watch hempcrete videos and look closely at the wetness or consistency or tamping technique you will see inconsistency all over the world. I am not offering this as a criticism, I am simply showing that hempcrete is likely to vary widely albeit within certain parameters. It is therefore difficult to come to any firm conclusions about the exact density of hand-cast. A review of the scientific literature confirms this with varying densities offered and a range of Lambda (thermal conductivity) values cited.

There is some inconsistency with spray-applied hempcrete too, but the issues are not the same. The machine will deliver the hemp with a regular force onto the wall and as no tamping is required the inconsistency of tamping force is eliminated. However, it stands to reason that a sprayer that delivers hemp and binder down different hoses and mixes at the nozzle will be slightly less consistent in the distribution of binder onto the hemp, depending on what is being sprayed and how well it is being done. Larger expanses of wall are relatively easily sprayed, but the lance operator needs to be focussed when spraying intricate building details to get the best out of the machine.

The ratio of binder to hemp on the machine can be easily regulated by the turn of a dial, but this is both a blessing and a curse. Adjusting ratios for specific building elements or to accommodate different binders can be most useful, but for general spraying the machine ratios have to be set and confirmed at the beginning of each day to ensure a consistent density of hempcrete. Over the years we have developed ways of identifying whether the machine is delivering the correct ratios by eye, but we still count the actual volumes used each day to maintain consistency.

So, if we accept there is a level of inconsistency within the industry the next question I would pose is “To what extent does this really matter?” We know that generally when Lambda values are tested the results are often largely related to density and we tend to consider a less dense hempcrete a better insulator. However, we also know that Lambda values are only a part of the story and that thermal mass, moisture regulation and phase change are crucial factors in keeping operational energy in hempcrete buildings low. We might also argue that a hempcrete building will outperform more conventional buildings on so many levels, so does it really matter exactly what density it is or whether it was spray-applied or hand-cast?

There is an inconsistency in this industry of different hemps, binders, mixers, water, tampers and application methods, but within certain parameters the hempcrete seems to be providing an awful lot of comfort all over the world without costing the earth. As time moves on and the industry grows up a little more I am sure that we will have to become more consistent as an industry, but the simple truth still seems to be that if you place hemp in a lime-based binder with some water in largely the correct proportions the building will likely perform better than most other, more toxic, building materials. Get the detailing right and you will have built a building that will lock up carbon and provide comfort for a very long time.

I often read a scientific paper on hempcrete and start out with some optimism that it will shed light on a particular area, only to discover halfway through when I see a photo of the hempcrete, that the mix they have tested bears little resemblance to hempcrete as I know it. I acknowledge entirely that testing must go on, but we are in a climate emergency and testing and re-testing, often of the same properties by different institutions, is the modern-day equivalent of fiddling whilst Rome burns. There are enough examples of successful hempcrete buildings in the world with exceptional environmental credentials and low energy bills, but somehow the construction industry and academic institutions are still painfully slow to move forward.

So all that being said, the original questions were “Is spray-applied denser? And do you notice a change in the insulative value?”

I would argue that spray-applied hempcrete has a tendency to be less dense based on the following:

The lime producers St Astier have tested samples of spray-applied hempcrete provided by 3CM for compressive strength, density and thermal performance. They have concluded that the samples were less dense than with hand-casting and interestingly they were surprised how good the compressive strength was. These results are not in the public domain, but I have contacted 3CM and we have asked St Astier for permission to reveal the results. If they permit this I will share them with the forum.

That spraying might create a less dense hempcrete shouldn’t be that surprising if you consider that the hemp and binder land on the wall and are not tamped down. It is common whenever we teach people to hand-cast hempcrete that they almost always have a tendency to compress the hempcrete too much with their tamping and need several reminders in the early days to relax into it.

The Ereasy machine by Damien Baumer is another machine that sprays (or pumps? depending on your viewpoint!) a very lightweight premixed hempcrete with only 75kg of binder per cubic metre. It is, I suspect, the least dense hempcrete known and it will be interesting to follow its progress over the coming years. If it catches on I think we will definitely be looking to a spraying application for low-density hempcrete.

With the 3CM spray machine the density of the hempcrete can be adjusted very simply and I would say that we run at a slightly lighter mix than for hand-casting, but up until recently I had never really thought too much about the exact density that we run at in comparison to hand-cast. So, it is my intention over the coming months to spray several samples with the usual ratios and conditions that we work in and then establish their density. I will also hand-cast to the same ratios and tamp to varying degrees to look at how the tamping affects the density. This should shed some more light on the subject and I will, of course, share my findings with the forum. I do not have a strong feeling about density either way in relation to the different installation techniques so it will be interesting to find out more.

The second question was “Do you notice a change in the insulative value?” Again we are a little short on testing here, but the one paper that has made a comparison between hand-cast and spray-applied hempcrete did conclude that spray-applied performed around 20% better thermally than hand-cast. The paper, Projection Formed and Precast Hemp-Lime: Better by Design? can be found on the internet with a Google search for those who are interested.

This paper questions whether or not the alignment of the shiv in a hempcrete wall makes a difference to its thermal performance, and if so, does vertical hand-casting, casting horizontally into panels, or spraying confer any particular alignment that is thermally important. The paper concludes that the alignment of the shiv does have a positive effect thermally and that the spray-applied performed best thermally out of the three methods. Below is a quote from the conclusion:

“This orientation was found to be greatest in projection formed material which afforded it a lower transverse thermal conductivity than cast material despite being of greater density. The mechanical performance of projection formed material was in general found to be lower than that of cast material and was attributed to a less even distribution of the binder within the composite. The results highlight that in order to compare hemp-lime in a meaningful way, the in-situ orientation of the material must be considered.”

For me, the paper was interesting to read and thought provoking, but it generated more questions than it answered. Perhaps this is just what good science does?

When spraying the sample for the study I set the machine to spray at about the rate we would normally spray at. The researcher felt that this amount of binder was not consistent with his other samples so I turned the binder level up until it was estimated to be the same consistency as the cast samples. As it turned out he appears to have matched the samples closely as their analysis showed the two samples had similar ratios of binder to hemp. The binder content of the samples tested was therefore greater than the content we usually spray at and this in turn will affect the density. I was not present when the cast samples were made so have no knowledge of the extent to which they were tamped.

This raises all kinds of questions that if I am honest I do not really know the answer to. In this case the sprayed sample was more dense, both at 28 days and at its final dry weight and yet it performed better than the other two samples thermally (?). This in itself poses further questions, and yet confirms my suspicion that what happens with hempcrete’s thermal performance is a bit more complicated than a simple “lightweight mixes automatically perform better” viewpoint. I recall that Wolf Jordan also mentioned this in one of his posts on tamping regarding overall thermal performance.

The hand-cast in situ hempcrete had the best compressive strength and this makes sense to me as it is tamped down, so in theory I would have thought that this should also lead to a higher density (?). But this is not the case. The hand-cast in situ and the factory-formed also have different compressive strengths and thermal values, but the density is reported to be the same (?). This would indicate that the orientation of the shiv is having a reasonably significant effect (?). I would like to make it clear that my observations of the paper are not criticisms. This paper has shed an enormous amount of light and whilst it does not answer all my questions, it does give hints as to what questions might be asked in the future to advance our knowledge of this sometimes tricky material.

So my answer as to whether I notice a difference thermally with the spray-applied is “Maybe?”. I think there are some very strong commercial and practical advantages to spraying hempcrete, but at present without more research or confirmation I would hesitate to claim a strong thermal advantage. I would add that the reaction from my clients is always the same. They tell me their energy bills are a fraction of what they were and that the house is always the right temperature – cool in summer and warm in winter – but I suspect this is just the same for any hempcrete contractor.

2 Comments on “Density and Thermal Performance” 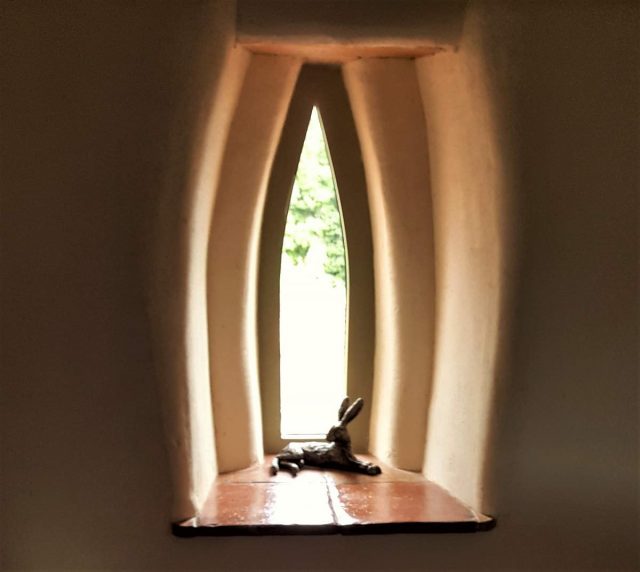 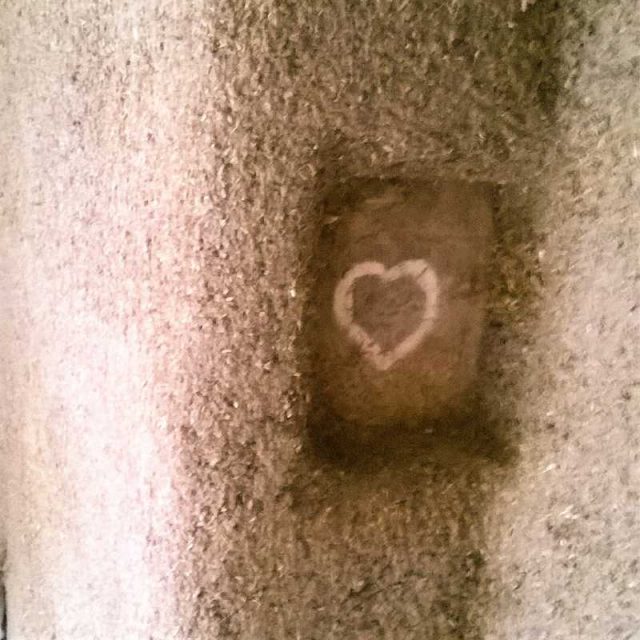